John McDonnell has promised that a Labour government would “rewrite the rules of our economy” as he announced proposed reforms to business regulation that he said would help workers “take back control”.

In a speech that made a series of attacks on corporate excess, the shadow chancellor declined to confirm that Labour is planning a windfall tax on oil and gas companies – a policy Labour had been seriously considering in recent days.

But he outlined a series of far-reaching changes to the “regulatory architecture” that governs how Britain’s businesses can behave.

“We aim to take on the excesses of the shareholder model and lay some of the foundations of a stakeholder economy,” he said. “Today’s business model of shareholder domination is increasingly proving to be incompatible with not just the fair and respectful treatment of workers but also with the responsibilities associated with any organisation operating within a democracy.” 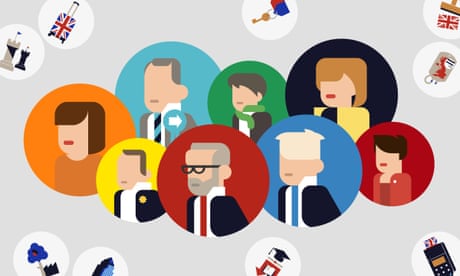 He said a Labour government would establish a series of powerful commissions to oversee corporate behaviour. An overarching business commission would contain within it three separate watchdogs – a companies commission, a finance commission, and an enforcement commission.

Answering questions afterwards, McDonnell confirmed he would like banks to be included in the new system, in what could be the biggest shake-up of financial regulation since 1997 when Gordon Brown made the Bank of England independent. “My own view is that I would like to see banking within it,” he said.

McDonnell outlined a series of perceived faults with the way shareholder capitalism worked, including short-termism, excessive executive pay, the lack of bargaining power for workers and the “cartel” behaviour of the big four accounting firms.

He said Labour would force the big four – Ernst and Young, Deloitte, KPMG and PwC – to separate their audit and non-audit businesses. This would be aimed at avoiding the conflicts of interest he claimed could arise when the firms were selling consultancy services to the same company whose accounts they were meant to be casting a sceptical eye over.

McDonnell also said a Labour government would establish a “statutory auditor” to carry out its own checks on companies. “Its purpose will be to conduct real-time audits of banks, building societies, credit unions, insurers and major investment firms. The auditor will not be dependent on fees from client companies and as a result could become independent and robust,” he said.

He said Labour would rewrite the Companies Act to ensure firms were responsible to employees and customers as well as their shareholders, and insist that one-third of board members were staff.

Larger companies would also be given the option to create a German-style two-tier board structure, with a separate supervisory board having oversight over executives.

McDonnell confirmed that Labour would force large companies to establish an “inclusive ownership fund”, in which they would be obliged to set aside up to 10% of their shares for employees, who would then be entitled to receive dividends worth up to £500.

The policies have been drawn up with the help of academics including the accounting expert Prem Sikka.

Business groups responded warily to McDonnell’s speech. The British Chambers of Commerce warned against a “one size fits all” approach.

The BCC’s co-executive director Claire Walker said: “It’s one thing to support employee ownership, stronger corporate governance and a transition to a greener economy, which have had positive impacts on many firms. But it would be misguided to impose a rigid, one-size-fits-all approach.

“Getting our economy moving requires serious investment in skills, infrastructure and a reduction in business costs. But extensive government interference in ownership and governance could deter investors and damage confidence.”

We may not always like it, but one of the intractable realities of the human condition is that nothing ever stays the same. Families, companies, nations, the English language, our daily lives: they all change, for better or for worse, quickly or slowly, all of the time.

Politics is no different. It is therefore absurd to frame the European referendum as a choice between a terrifying revolution (Leave) and an unthreatening embrace of the status quo (Remain); instead, what we are being asked is to choose between two radical change agendas with complex, unpredictable consequences.

Brexiters have been confronted with the possible downsides of leaving; now Remainians must address the financial and political risks of staying

Both come with risks and challenges; both are uncertain and will require adjustments; both will mould our country, our economy and our political institutions into something very different to what they are today. But while the Leave side has relentlessly (and rightly) been grilled about its post-Brexit vision, the Remain camp has been shamefully let off the hook.

It hasn’t had to explain how exactly it sees the EU evolving over the next decade or two, and what we would therefore be signing up to. Brexiteers have been confronted with the possible downsides of leaving; now Remainians must address the financial and political risks of staying.

The starting point for any sensible discussion is to acknowledge that the EU is facing an ongoing economic and social crisis, and is desperate to deepen its integration further. Remain must tell us how this would impact the UK, and why it thinks that we would be better off dealing with the fallout inside, rather than outside, the EU.

What, for example, will happen when the next Eurozone crisis erupts (and no, denying that there will be one isn’t good enough)? A new deal appears to have been cobbled together for Greece, but the real worry must be Italy, a country whose economy has not grown at all since 2000, which is crippled by 11.4 per cent unemployment and a massive national debt, and which could bring down the euro.

When I was growing up in France, it was always clear that the EU was a political project that used economics as a tool of state-building

Would we have to put our hands in our pockets directly when the next crisis erupts, or would the impact merely be indirect, reducing our exports to the region? It may be that the European Central Bank is forced to resort to helicopter money, but there is a very real danger that Germany would refuse to put up with that, destabilising the Continent.

There are thus political risks wherever we look. Will Spain go populist? Will the current riots spiral out of control in France? Austria’s economy has been growing yet an extremist, authoritarian candidate grabbed 49.9 per cent of the vote at the presidential elections. What next? What is the chance of Marine Le Pen winning a presidential election in France, if not next year then in six years’ time, and waging all-out war on globalisation? What would the impact be on our economy and investments in France? Wouldn’t we be safer out?

Eastern Europe has also started to elect unsavoury politicians: it may well be that the immigration crisis will tear the EU apart, especially when the Dublin convention on refugees is replaced by a quota system. Expanding the EU to include additional countries, which is very much Brussels’s plan, would exacerbate opposition to the free movement of people.

Given all of this, Remain needs to explain why we wouldn’t be better off trying to diversify our economy towards more resilient parts of the world. The share of our exports that goes to the EU has already collapsed from 55 per cent in 1999 to 44 per cent last year – but shouldn’t we be trying to reduce this further and faster?

If the eurozone succeeds in harmonising its fiscal policies and becoming more like a single entity, it may succeed in overriding British interests more effectively, which could be another reason for us to leave.

The EU was always intended by its founders to be a process – a mechanism by which formerly independent European countries gradually bind themselves together into an ever-closer union. Crises were seen as useful flashpoints that would trigger a further push to integration, and its central institutions were deliberately designed to seek and accrue power.

When I was growing up in France, it was made consistently clear that the EU was a political project that used economics as a tool of state-building; the single market was created because all countries have a free internal market, not because the EU’s founding fathers believed in international free trade. We used to be taught all of this openly and explicitly at school: the EU was the obvious, rational future, the only way war could be avoided and the best way to protect our social models from the ravages of “Anglo-Saxon” markets.

There are therefore two possibilities if we vote to stay: eventual abrupt disintegration, or further EU integration. If the latter, how many more powers will we give up when the next treaty comes along, and how much “progress” will be made in critical areas like a European army, tax harmonisation, and the centralisation of justice and home affairs? Why haven’t voters been told ahead of June 23?

The biggest, costliest and most immediate change after a Remain vote would be psychological. Forget about all the caveats: an In victory would be hailed as proof that Britain has finally ceased fighting its supposed European destiny. Our bluff would have been called in the most spectacular of fashions: after decades of dragging our feet, of being ungrateful Europeans, of extracting concessions, rebates and opt-outs, of trying to stand up for our interests, we would finally have hoisted the white flag. The idea that we would hold another referendum on the next treaty would simply be laughed out of town. Voting to Remain would thus be a geopolitical disaster for the UK, a historic failure.

Comfortable, middle-class voters who are considering sticking with the devil they believe they know need to think again. Voting to remain is a far greater leap into the unknown than voting to leave. It’s self-evidently normal to be independent and prosperous: just look at America, Australia, Canada or Singapore. But there are no known examples of a previously independent democracy being subsumed into a dysfunctional, economically troubled technocracy and doing well as a result. As mad gambles go, it is hard to think of anything worse.